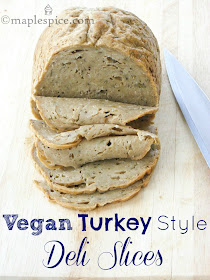 Now, I don't work with vital wheat gluten much. Anyone who lives in the UK or Ireland will know why - it's almost impossible to buy the stuff! Online only as far as I can see and I like to keep my foodstuffs ordered online to a minimum  That being said I do order vital wheat gluten mostly so I can make my Vegan Rullepølse, which is an absolute Christmas essential for me :-)

Since I had some about I thought I would have a go at some turkey style deli slices. This was inspired from 2 sources, first - the turkey style broth for seitan in La Dolce Vegan and Vegan Dad's Corned Beef.

I once tried the broth in La Dolce Vegan when I got brave one night and attempted to make my own wheat gluten (nightmare, I don't recommend it!) but I loved that broth, the sage and onion flavouring really was reminiscent of Christmas turkey and I actually continue to use a variation of it as a gravy. Then I made Vegan Dad's corned beef which is steamed rather than boiled and I was so impressed with the texture: tender, not too chewy and when it's cold can be sliced really thin.

So I thought I would combine the two, adding the flavourings from the broth in La Dolce Vegan with the steam and bake method Vegan Dad uses. I am so happy with the end result, well, for someone who rarely uses vital wheat gluten I am! If you know those sage and onion slices by Redwood foods this is very close, and I love those. (Just a note, I noticed that Vegan Dad also has turkey style slices but he uses flavourings I can't buy here so figured I would stick with La Dolce Vegan's flavourings).

In the same way any meat style dish features in my life it's for one reason only - memories. Good food memories. For me, leftover Christmas turkey was only consumed one way: thinly sliced in buttered white bread with lots of mayo and a bit of salt and pepper. Yes. Sliced white bread - gasp! So, that's exactly how I had this (with vegan butter and mayo, of course) and it reminded me so much of my old favourite. That being said I can also see this working as a roast, thickly sliced while warm and served with the usual trimmings. 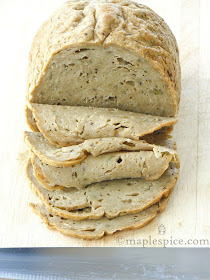 I prefer to do all of this in a mortar and pestle but you could use a food processor if you prefer or even by hand.

In a mortar and pestle add the nutritional yeast flakes, onion powder, salt, sage and thyme and grind until the yeast flakes are like a powder and the herbs get crushed. Remove and set aside.

Add the beans to the mortar and pestle and mash until really creamy. Transfer to a large bowl.

Mix together the water, olive oil, soy and worcester sauce in a pyrex measuring jug then whisk in the yeast and seasonings. Pour a little over the beans and whisk to incorporate, slowly add the rest of the liquid whisking all the while until mixed.

Add the wheat gluten and mix well until it comes together. Sprinkle some more wheat gluten onto a surface and knead a few times until you have a large, wide oval loaf. I probably kneaded in a couple tablespoons more gluten here but the loaf will be on the wet side. That's good as you won't end up with dry deli slices, although it is probably the reason for the holes in the end product there. Still, I wouldn't change a thing here as the taste and texture was lovely!

Wrap the loaf up in foil, sealing the edges well and steam for 1 hour. Do check the water levels now and again as it can easily boil dry!

Preheat the oven to 180C when there is about 15 minutes left of steaming. Place the foil wrapped loaf directly in the oven and bake for 30 minutes. Remove and let cool then it's ready to be sliced thin for sandwiches. 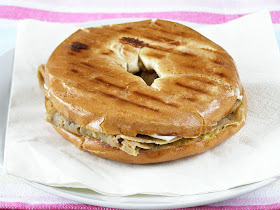 Furthermore, I used the slices to make another variation on my Vegan Butter Grilled Bagel Toasties. This one had the turkey slices, vegan mayo, black pepper and Dijon mustard and was amazing! Possibly a new favourite here :-) Just toast using the same method as the other bagel toasties in the post there. 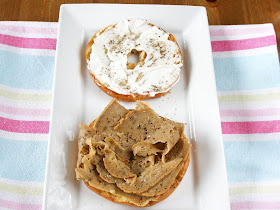